Please read these guidelines before preparing your manuscript.

To all authors: Please be informed that, as from 1st January 2021, the Chiang Mai Journal of Science will change its manuscript submission system to Editorial Manager. 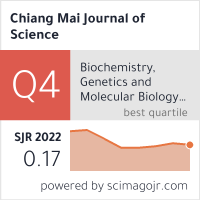 IMPORTANT NOTICE
All accepted papers which were submitted on or after 1 January 2022, will be subjected to a revised publication fee of US$ 350. Please note that this revised fee also covers any bank transfer charges which may apply.

This paper demonstrates the effect of bond-interfaces slip on the shear responses within the non-ductile reinforced concrete (RC) columns. Those columns were conducted as the flexure-shear critical members, which were commonly found in the existing RC frame structures constructed before the regulation of recent seismic codes. To represent the behaviors of those columns, the proposed model is developed within the framework of the forced-based formulation under the Timoshenko beam kinematic assumption. The axial-flexure interaction of the RC frame element is considered through the fiber-section model while the shear action couples to the flexural action through the UCSD shear-strength model within the shear constitutive model. Finally, one simulation is employed to verify the model performance to predict complex behaviors of the non-ductile RC columns for seismic analysis and to discuss the effect of bond-interfaces slip on those responses. From the results, it confirms that the proposed model is simple but accurate. Furthermore, the model can well represent several salient features of the non-ductile RC columns such as the shear-flexure interaction effect, the strength degradation in shear due to the increasing curvature ductility demand, the gradual spread inelasticity, and the weakened shear responses due to the bond-slip effect. The predicted maximum shear force is well corresponding to the value obtained from the experiment with an error of about 0.83% while the error obtained from the frame model without the bond-slip effect is about 2.58%.

Tri-n-butyltin(IV) n-butoxide (nBu3SnOnBu) was successfully synthesized and utilized as a stable and homogeneous initiator for the small-scale synthesis of biodegradable polymers in our laboratory. From our previous works, the initiating performance of nBu3SnOnBu in the ring-opening polymerization (ROP) of cyclic ester monomers was completely investigated by differential scanning calorimetry (DSC). It was found that nBu3SnOnBu acted as the slow initiator in the ROP of ε-caprolactone (ε-CL) due to its high steric hindrance around the active center. Moreover, it could be used in the stereoselective ROP of racemic-lactide (rac-LA). The synthesized nBu3SnOnBu showed higher stereoselectivity than the conventional tin(II) octoate (Sn(Oct)2) system. In this present work, the effectiveness of nBu3SnOnBu in scaled-up (250 g) of the synthesis of poly(ε-caprolactone) (PCL) was further investigated comparing to small-scale polymerization (4 g). Furthermore, the catalytic performance of this nBu3SnOnBu in the transesterification of high molecular weight poly(L-lactic acid) (PLA) was also investigated for the first time. The transesterification of PLA with 0.05 M and 0.10 M of soluble nBu3SnOnBu catalyst in CHCl3 was successfully investigated by the gel permeation chromatography (GPC) technique. It was found that the molecular weight of PLA dramatically decreased with increasing time and nBu3SnOnBu concentration. From the kinetics study, nBu3SnOnBu acted as a highly active transesterification catalyst for PLA. From a mechanistic study, the transesterification mechanism of PLA with nBu3SnOnBu catalyst was proposed through intramolecular transesterification.

This research aims to establish the limit load solution for thin-walled cylinder with circumferential crack under combined internal pressure, axial force, bending moment and torsion moment. The solution is derived based on the net-section collapse principle and the von Mises yield criterion. The material considered in this work is assumed to be elastic-perfectly plastic. The solutions obtained from this work are compared with the results from the finite element models. The comparison shows that the equations established from NSC analysis provide acceptable results for the case of cracked cylinder under combined axial force and bending moment. For the case of cylinder subjected to internal pressure or torsional moment, however, these equations can be used to predict the limit load only if np ≤ 0.40 and nT ≤ 0.6. This is because when the effects of internal pressure or torsional moment are included, the distribution of stresses on the crack plane at the yielding does not correspond to the NSC principal.

A process for preparing polylactide-block-polyethylene glycol (PLA-b-PEG) copolymers has been developed and optimized by employing a transesterification reaction in a melt-mixing process. The reaction was carried out in a counter-rotating mixer unit, using polyethylene glycol (PEG) and tetrabutyl titanate (TBT) catalyst. The effects of PEG weight percentage, catalyst contents, temperatures, and rotor speeds on chemical structures of the resulting PLA-b-PEG were examined, in terms of number average molecular weight (Mn), weight average molecular weight (Mw), in-chain PEG contents (wt.% PEG), and specific mechanical energy (SME) imparted by the mixer. The process parameters were optimized using a central composite rotatable design (CCRD) response surface methodology (RSM). The CCRD was designed with four variables at three levels of variations (-1, 0, -1), four replicates center point, and a redundancy factor (α) of 2.000. The responses (Mn, Mw, wt.% PEG, and SME) from 28 experimental trials were analyzed by a multiple linear regression fitting, a second-order equation, and the RSM model. Mn and Mw of the products were determined by gel permeation chromatography (GPC). The in-chain PEG content was examined by nuclear magnetic resonance (1H-NMR) spectroscopy. The results show that the PEG weight percentage and the reaction temperature significantly affect (P< 0.05) Mw and Mn of the products, which are drastically decreased with an increase in the PEG weight percentage and temperature. A quadratic interaction is observed between the PEG weight percentage and temperature, indicating that high reaction temperature leads to lower PEG conversions, due to undesirable competing thermal-oxidative degradations of PEG in the presence of the catalyst. Optimum operating conditions on the PEG weight percentage, catalyst contents, temperatures, and rotor speed for obtaining high Mw with high wt.% PEG was identified. Although the optimal conditions are observed at the boundary level, the model serves as a platform for effective preparation of PLA-b- PEG copolymers with designed molecular weight and chemical structures. Further optimization of the model may be conducted by extending the range of independent factor levels. The resulting flexible PLA-b-PEG copolymers, with tunable structures and properties, have high potential for use as singlecomponent degradable bioplastics with excellent mechanical properties, plasticizers, or toughening agent for enhancing PLA’s toughness.

Elasticity of biological tissue is important to understand its properties, which could play important role in medical diagnosis and treatment, especially in its early stage of pathology. Optical Coherence Elastography (OCE) has been intensively developed for mapping the elasticity contrast of various biological tissues. OCE techniques based on tracking of shear vibrational wave propagation is one of the most popular techniques. The high speed of shear wave propagation in biological media leads to challenges in both data acquisition and data processing. Recently, the concept of reverberant shear wave field has been applied to OCE, called Rev3D-OCE. In this work, we experimentally investigate the performance of Rev3D-OCE to differentiate gelatin phantoms with a slight difference of elasticity. We verified that Rev3D-OCE can differentiate different shear wave speeds associated with different concentrations of gelatin phantoms, where higher shear wave speed was observed in a higher concentration of the phantom as expected. The average shear wave speed of gelatin with 3 wt% and 4 wt% concentrations were measured as 1.3 ± 0.2 m/s and 1.5 ± 0.1 m/s with about 11% and 14% of errors as compared with that obtained by standard mechanical testing, respectively. In addition, the spatial resolution of Rev3D-OCE as determined from the edge response measurement at the boundary between two gelatins of 3 wt% and 4 wt% concentrations was measured to be 0.3 millimeters.